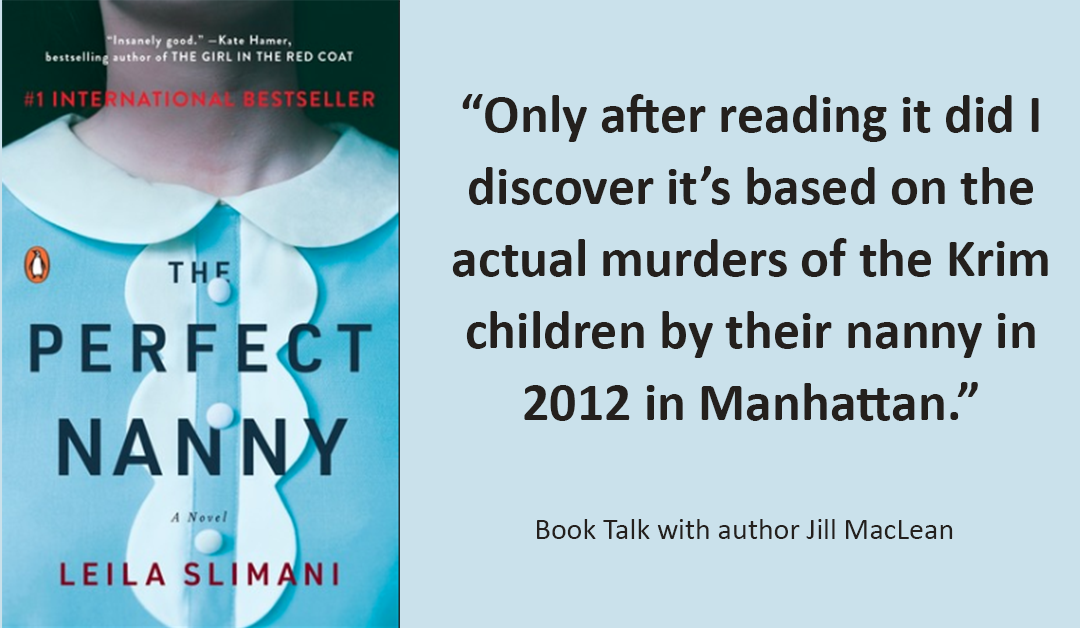 Do you read book reviews before you read the book or afterwards?

I opt for “afterwards.” I want to read the novel, think about it, then check out the reviews to see if I agree with them or if I’ve missed something crucial.

I read Leila Slimani’s The Perfect Nanny (2016) this past week. A close reading, because the terrible events of the first page lead the reader, inevitably, to ask “Why did this happen?” and I didn’t want to miss any clues to the nanny’s motives for killing the two children in her care (her name is Louise).

The novel won the Prix Goncourt. Only after reading it did I discover it’s based on the actual murders of the Krim children by their nanny in 2012 in Manhattan. I was made very uneasy by the close correspondence of detail between the real killings and the first page of Slimani’s book, and can’t help wondering how the Krim family feels about this, particularly since the novel came out in the States just before the trial of their nanny began (yesterday I found out that she has been convicted of the murders and faces life in prison).

The Washington Post praises how the language and complexity of The Perfect Nanny raise it above its “formulaic premise,” yet says the novel can’t leave you with much more than the obvious conclusion that there is no perfect nanny, and a “psycho” nanny is always a possibility. The New York Times lays the blame for the crime on a depth of loneliness that drove Louise to madness and murder.

Yes, Louise was hospitalized for “delirious melancholia,” a fact the parents, Myriam and Paul, don’t uncover in the brief time-slot on a Saturday afternoon they’d set aside to find a nanny for their two children. Still, I found it interesting the reviews didn’t place more emphasis on Louise’s dire poverty, her lifelong lack of money, education and even minimal emotional support.

This is a political story. There are telling scenes which describe the other nannies whom Louise joins at the park, those whose lives will never be recorded even though they’re filled with “shameful secrets” and “awful memories.” Power, class, dependence, subjugation and ambition all play out their varying roles among Myriam, Paul and “their” nanny – an interesting use of the possessive.

The point of view is omniscient, opening up the many factors that bring Louise to the brink. Sometimes, in my opinion, the narrator is guilty of “telling” that isn’t character-rooted, or of unrealistic switches in character. Overall, however, Slimani describes actions that illuminate character: Louise’s obsessive cleaning of her ten-year- old shoes, the sinister games of hide-and-seek she plays with the children, the immaculate chicken carcass she leaves out for Myriam as a rage-driven condemnation of her employer’s wasteful habits. The carcass makes Myriam edgy; Paul laughs it off.

As the novel progresses, the boundary between employee and friend becomes blurred. When the family goes to Greece for a holiday, they take Louise. Paul tries to teach her to swim, they all eat together and for the first time in her life, Louise experiences beauty and comfort. The vacation ends. She is dropped off at her wretched apartment to spend the weekend alone. Gradually friendship is withdrawn, and with it the safety of the little nest Louise has found with Paul and Myriam.

As the novel narrows to the point at which it began, it simultaneously has broadened and sometimes, although not always, deepened. We have been given personal, situational and societal motives for a horrendous crime. But in the end, as we all know, the causes for another person’s actions must always remain enigmatic.