Does each reader create a different book? 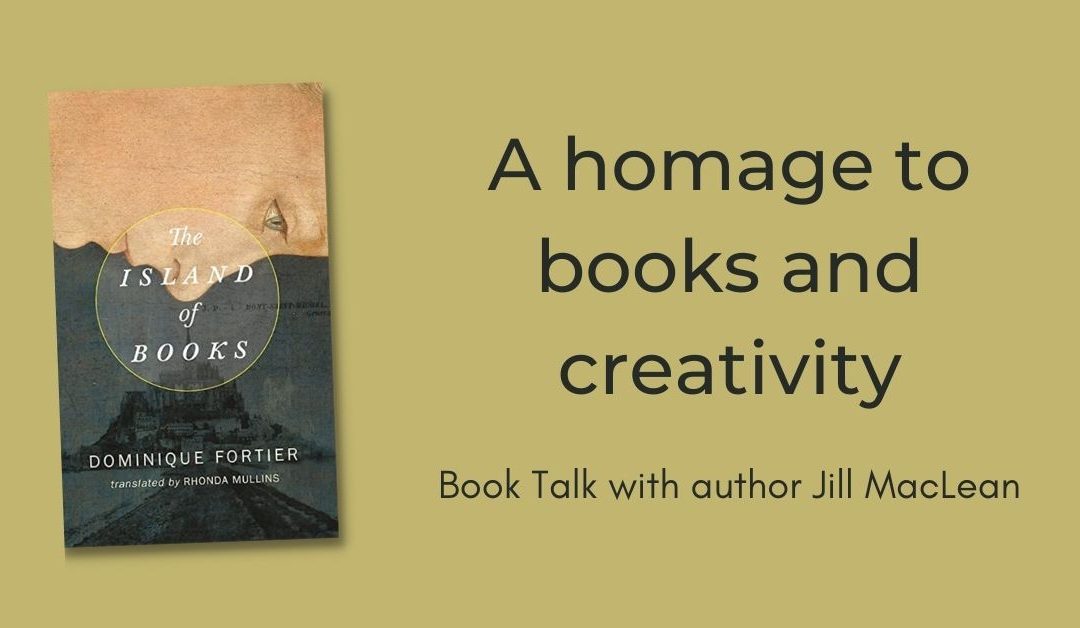 Quite simply, I loved this book, which I came across while scrolling through the Coach House catalogue. Dominique Fortier has written a quiet novel, intelligent and multi-layered, its style, paradoxically, both spare and sensuous. She won the Governor General’s Award for French Fiction in 2016 for Au Péril de la Mer, which was translated by Rhonda Mullins as The Island of Books.

The novel moves back and forth between the present-day narrator, an unnamed woman who has lost a talent essential to her, and a fifteenth-century illiterate painter named Éloi, whose life has lost all meaning. Although we learn very little about the woman, she does reveal her long-time fascination with the abbey of Mont Saint-Michel and her pain at being exiled from writing by motherhood; gradually she discloses the abbey’s history, from the long-ago hermits who built two small chapels on a stone mountain in the sea, to the depredations of today’s tour buses. Abbey, mountain, and her own curiosity lure her to write the fragmented novel we are reading.

The characters of the 1400s are more fully fleshed. Éloi has been deprived of any palette but grey: his vibrant young love Anna has died. He is rescued, drunken and penniless, and taken to the monastery of Mont Saint-Michel by his cousin Robert, who manages its daily business under the authority of an ultra-orthodox vicar.

Inexorably as the tides that twice daily liberate Mont Saint-Michel from being an island, Éloi is drawn into the affairs of the abbey; simultaneously, he listens to troubled, wise Robert, a man of faith as the vicar could never be, as Robert considers the disillusions of ageing, as he shows Éloi an ancient manuscript containing heretical knowledge of the heavens, as he grieves the library of precious books that is the abbey’s heart and that the vicar intends to remove.

Does each reader create a different book? Is all of life merely a copy of what has gone before? Must art invent that which has never been seen? The Island of Books raises more questions than it answers – and I hope you will enjoy it as much as I did.