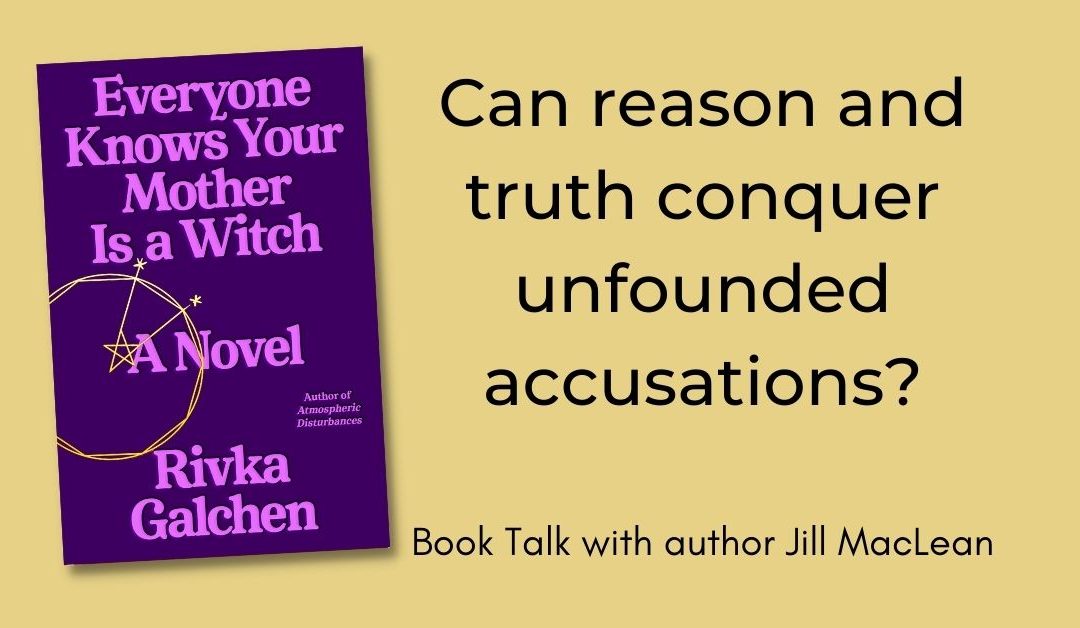 Everyone Knows Your Mother is a Witch, by the Canadian-American author Rivka Galchen, is an historical novel that is all-too relevant for our modern world. There are several excellent reviews of the novel (Harper Perennial, 2021) and I recommend the following link for an interview with the author: www.guernicamag.com/rivka-galchen

Everyone Knows Your Mother Is a Witch was, for me, both a fascinating and a disturbing read. Set in Germany in the early 1600s, it is based on the actual documents for the trial of Katharina Kepler (mother of the astronomer Johannes Kepler), who in 1618 was accused of being a witch. New research claims that over 14,000 witch trials ended in death in Germany, Switzerland and northeastern France. Whether you view this as scapegoating for the climate disasters of the Little Ice Age or as part of the power-struggle between Catholicism and the newly established Protestantism was of no matter to those accused, tortured and executed.

Because it isn’t difficult to see the contemporary relevance of Katharina’s story, the occasional anachronisms, like “okay” and “mom,” seemed unnecessary to me. Social media can be our platforms for greed, envy and misdirected anger: we’ve simply speeded up the process. And in our society, as in Katharina’s, misogyny runs rampant.

Katharina is an independent, clever, outspoken and intrusive woman, “a woman of substance” who strides about her beloved village of Leonberg in a manner unbecoming to a widow. She is generous with her herbal concoctions; she prefers children and animals to adults; she is reputed to have ridden a goat backwards.

She stands out from the herd and the herd turns on her. The glazier’s wife Ursula begins the campaign, which soon burgeons into that deadly mindset, “Everyone knows she’s a witch.” Although Katharina adheres stubbornly to her belief that reason and truth will conquer malicious gossip and unfounded accusations, she’s imprisoned and brought to trial.

The novel does not dwell on Katharina’s suffering, which becomes all the more potent for being left to our imaginations. How does she sleep in her prison cell, burdened by an iron ankle brace that’s chained to the wall? Was she given a blanket during the bitterly cold winter? How could she not have dwelt on the multiple threats of thumbscrew and rack and death by fire? Her daughter Greta brings her food, but her house and lands in Leonberg are seized to pay for her imprisonment. Her good friend Simon defects as her guardian. In court, she’s querulous and impenitent, although she’s been told that tears and repentance – for crimes she has not committed – could stave off execution.

Galchen brings to vivid life the daily rounds of ordinary citizens (there is one delightful scene near the end of the book about the seventeenth-century Frankfurt book fair); she also gives us memorable characters ranging from Ursula’s pure nastiness to Greta’s pure goodness, and she writes sentences that blew me away. Simon, for instance, says of Katharina, “the rough breeze of her blew into the dying embers of me.”

The story is structured with great skill, written from Katharina’s point of view as well as Simon’s, interwoven with letters written in his mother’s defence by Johannes Kepler (and very unctuous letters they are), as well as the testimonies of accusers and defenders as recorded by an unseen interrogator seemingly indifferent to the outcome of the trial (think Kafka). Each testimony is an encapsulation of character and sometimes infused with genuine humour. But behind the testimonies lurks a dangerous faction: the men [sic] who have taken upon themselves to distinguish between “natural” misfortunes that come from God and unnatural afflictions that are the work of the Devil and hence correctible by whatever means come to hand. Make no mistake. Despite its often witty approach, this novel has a heart of darkness.