Why another memoir about trench warfare? This one is written by a private. 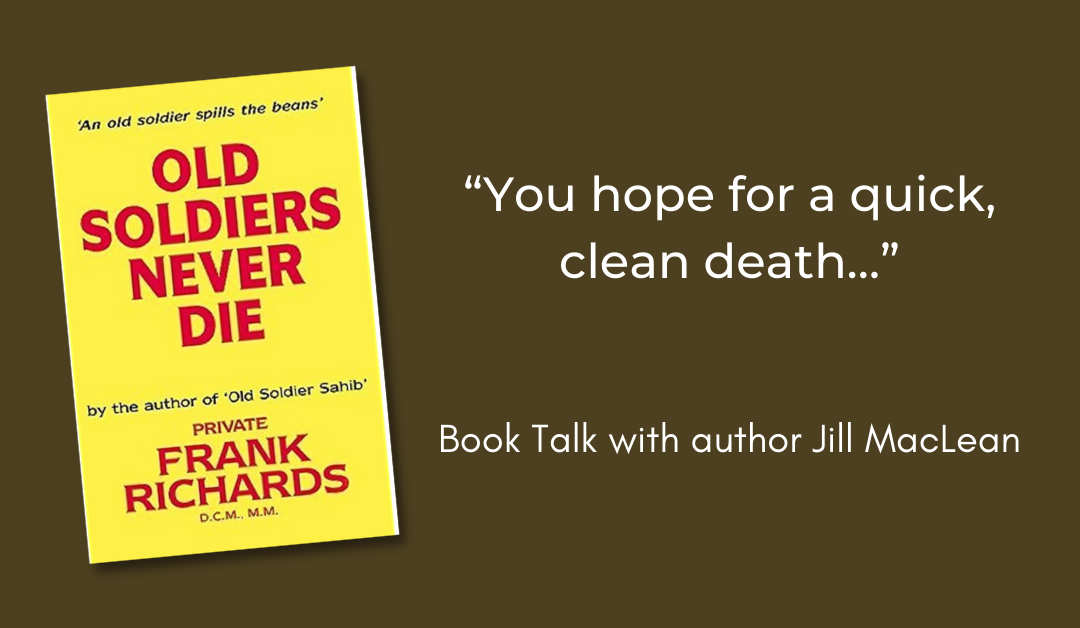 Phil Carradice’s BBC blog, largely biographical, describes how Robert Graves was instrumental in bringing the book to publication. YouTube has an old clip of Richards reading from his book.

What greater contrast from Undersong than a memoir written by a poorly educated, working-class, twice-decorated Welshman who chose never to rise above the rank of private (the lowest rank in the British army)? A professional soldier, he arrived in France on the 10th of August 1914 and left after the Armistice, having fought in almost every major campaign on the Western Front: the disastrous retreat at Loos (“a bloody balls-up”), the battles at Ypres, the final offensive in March 1918. He was never wounded. He was a signaler for a good portion of that time, a highly dangerous occupation, yet refused any claims to heroism. One by one, he lost his pals.

This is not a literary book: relying on memory throughout, he called pushing a pen “a wearisome occupation.” His style is matter-of-fact and anecdotal. And it is this very lack of theatricality that magnifies the impact of, for instance, the third battle of Ypres in Polygon Wood. He and his trench-mates cook their bacon and brew tea on a smokeless fire, savouring what might be their last breakfast. Advancing through heavy bombardment and bursting shells, the ground rocking and heaving, Richards couldn’t stop to help a shrieking, badly wounded German, even though he was (it doesn’t have to be a contradiction in terms) a humane soldier. As machine-guns rattled around them, “…we did some wonderful jumping and hopping…how we were not riddled is a mystery.” Howitzers pitched to the ground. Men were blown into the air. In the midst of it all, a mate of Richards stole rations from the dead and “we all had a muck in.”

He put faces to slaughter – to the unimaginable – with such economy that at times I had to put the book down.

Gradually his character emerges. Straight from the Cuinchy trenches, unshaven and unwashed, he was driven to be awarded his DCM in a brigadier’s car, and as the sentries saluted, Richards loftily ordered the apoplectic sergeant to dismiss the guard; I’m sure this little episode meant as much to him as his medal. Although he held in contempt officers who never went near the front, any officer with guts won his respect (including Robert Graves and Siegfried Sassoon). When he revisited the grave of a good friend who’d died three years earlier, he carefully tidied up the nettles and poppies around the wooden cross. He was an expert scrounger of everything from firewood to puttees to rum. After a night spent in a shell hole half full of water, shamming dead and surrounded by Germans, he admitted to being “in a state.” He helped retrieve the wounded. He detailed an escapade that was not to his credit. He hoped for a clean, quick death.

His health suffered during those long four years; and in the final chapter, back home, unemployed and with a pitiful pension, shillings less than dodgers received, he was understandably, if not lastingly, bitter.

So many appallingly graphic images in this book. Who can blame Richards for scrounging rum and getting properly drunk with his trench-mates? “It made us merry and helped us to forget.”

Old Soldiers Never Die shows that he did not forget.