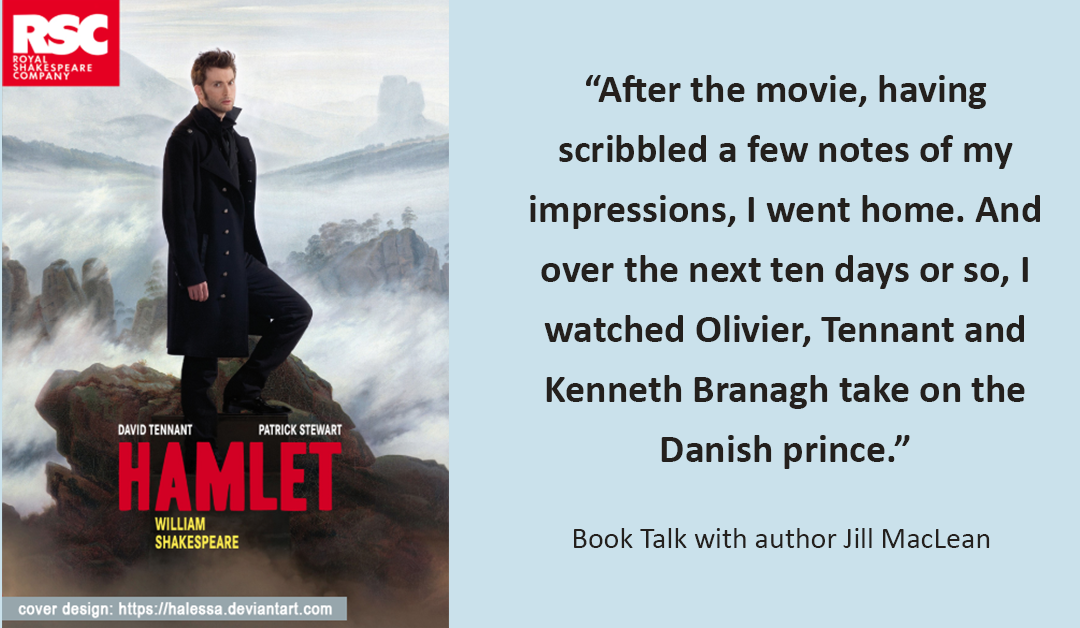 When the HD version of Hamlet starring Benedict Cumberbatch came to Halifax, I read the play first (no, I’d never read it, and yes, I’m admitting this on a public forum), then off I went to the movie theatre (this was pre-Covid).

But before I went, obeying one of those intuitions that can lead you places you need to go for reasons that are obscure, I detoured to Central Library and took out two DVDs of Hamlet – the reissue of Olivier’s 1948 film and David Tennant’s 2010 version.

After the movie, having scribbled a few notes of my impressions, I went home. And over the next ten days or so, I watched Olivier, Tennant and Kenneth Branagh take on the Danish prince. I re-read parts of the text. I read reviews of all four productions. Was there indeed any method in this temporary, exhilarating madness?

First thought: I was astonished by how many of the lines in Hamlet have become part of our day-to-day speech, even to the point of cliché – alas, poor Shakespeare.

Second thought: is this enterprise intended to sharpen my critical (in the best sense of the word) faculties?

Third thought: there are no stage directions in the play other than Enter, Exit and Exeunt – no he throws her to the floor or he raises his dagger. Each Hamlet is free to elucidate a character whose intelligence, rage, wit and indecisiveness furnish plenty of scope: the power of dialogue, and only dialogue, to feed depth and breadth of interpretation in actor and viewer – a bracing exercise for any writer to contemplate.

Kenneth Branagh’s 1996 film is the only one to present the whole text. Four hours, a version that Branagh himself has called the “eternity” version. After watching this film, the cuts in the other versions become problematic, particularly in Olivier’s – he gets rid of 90 minutes, shuffles the text around and reduces Hamlet to “a man who could not make up his mind.” One reviewer lamented how Tennant is deprived, near the end of the play and his own premature end, of the line, “Since no man, of aught he leaves, knows aught, what is’t to leave betimes?” Death in youth or death later in life, Shakespeare seems to be saying, what difference?

Given our modern understanding of a universe that counts distance in light years and time in billions of years, the question is particularly poignant. I find that brief speech of Hamlet’s to Horatio about death…“if it be now, ’tis not to come…” one of the most moving in the play, perhaps because he has, at last, understood the full cost of the task laid upon him.

Mysteries abound, though. Did Hamlet ever love Ophelia? (I believe so.) Did Gertrude knowingly drink the poison to save her son? (I think not, but can one be sure?) Was Hamlet projecting his rage against his mother onto Ophelia when he so brutally tells her to get herself to a nunnery? (Oh yes.) How could Gertrude supply so many details about Ophelia’s drowning – was she a witness or was she using her imagination? (I don’t know.)

And why did Hamlet fail to act? He loved his mother (no question of that) yet had sworn to the ghost of his father that he would slay her second husband. Kill a king to avenge the killing of a king – can he square that with his conscience? Was the Ghost deceiving him or was he an honest Ghost? Or was Hamlet resisting the “cursèd spite” that he was born – fated – to set the moral rottenness of Denmark to rights, as he so cogently tells us near the end of the first act in a line I feel is crucial to the whole play.

Then there are the varying impacts of grief throughout: Hamlet ponders self-slaughter, cowardice and truth, Ophelia goes mad, Gertrude, too late, realizes she married a murderer and lies in an “incestuous bed,” Laertes abandons principle in favour of vengeance – and the gravedigger tosses bones and skulls and makes mockery of us all.

A short postscript. I recommend watching Rosencrantz and Guilderstern are Dead, based on Tom Stoppard’s wonderfully witty play – these days, don’t we all need a little light relief?