Days Without End by Sebastian Barry Almost Wrecked Me 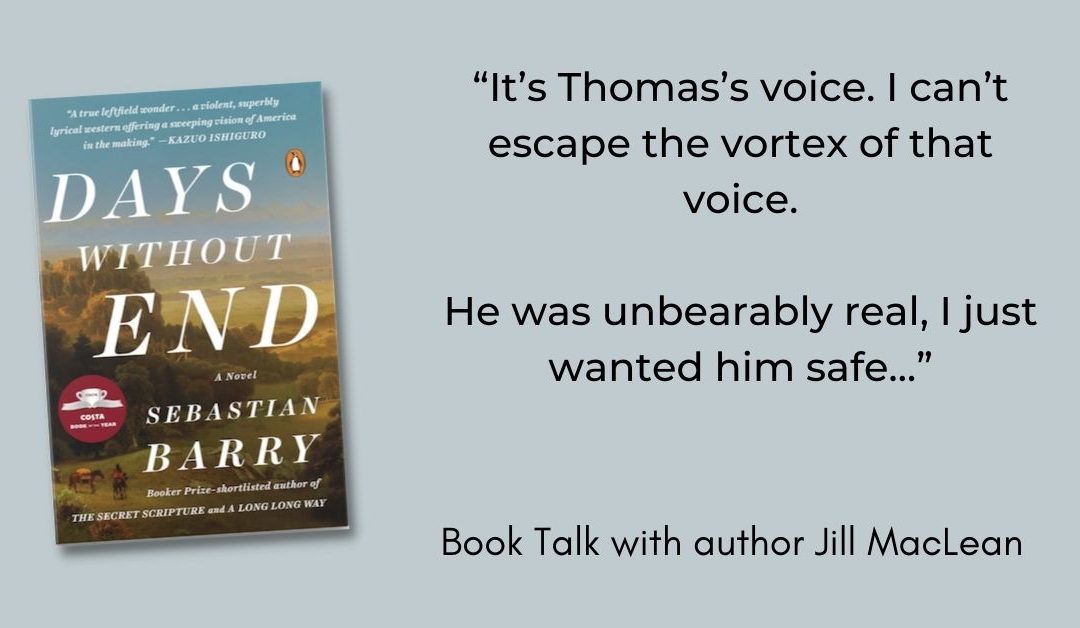 If The Dream of Scipio stirred me up, Days Without End almost wrecked me…what is it about a story that seizes you by the throat and won’t let go?

First, a digression. After I heard Michael Ondaatje and Linda Spalding read in Halifax, I reread The English Patient and then read In the Skin of the Lion – in the wrong order, as it happens. In both books, sentence after sentence stopped me in my tracks. Breath-taking sentences. And the last two sentences of The English Patient create the best ending of any book I’ve ever read (no cheating – you have to read the entire novel for their effect to twist mind and heart).

I next took Orhan Pamuk’s The White Castle out of the library, a novel about a 17th century Venetian who was sent as a prisoner to Turkey. The beginning was promising. I read on, but a third the way through the book I gave up because neither the characters nor the premise overly interested me – or would any novel following The English Patient have suffered a similar fate? (I’m deliberately saving Linda Spalding’s Governor-General’s winning novel The Purchase for later).

Then at St. Mary’s University Library – with its leafy wall of plants, its comfortable chairs and air of spaciousness – on a shelf near the jigsaw puzzle table (another very human touch), I found the latest novel by the Irish writer Sebastian Barry, Days Without End. I’d read Annie Dunne and remembered liking it very much; this one, rather to my surprise, was set in America.

The first sentence grabbed my attention. By the end of the first paragraph I knew I was in the hands of a master, and nothing in the book caused me to change my opinion. The first-person narrator, Thomas McNulty, leaves behind the famine-dead of his family in Ireland, where he and his kin were considered Nothing by those who could have given succour but did not: knowledge seared into his brain and inseparable from the slaughter that as an army trooper he perpetrates on “the enemy,” be they Indian or Rebel. Yet he is no simplistically, righteously angry young man.

One of the novel’s strengths for me is how Sebastian Barry parses the varying behaviours of that collective entity called “an army,” both off-duty and in battle. Others are the abundance of strikingly delineated characters: Handsome John Cole, Mr. Noone, the major, Starling Carlton, Lige Magan, Caught-His-Horse-First, and Winona; as well as Barry’s sure touch with events that circle back to their inevitable consequences. Yet another is the delicately drawn relationship between John Cole and “wren-sized” Thomas (or Thomasina), which was, so I read in an interview, inspired by Barry’s gay son Toby. But it’s the voice that took an axe to any hope I might have had of remaining aloof to Thomas and his fate.

He is seventeen at the beginning of the story, forty by the time it ends, and his voice is, I believe, what gives the novel its enormous power. As in The English Patient, sentence after sentence leaps from the page. He is semi-educated, Biblically literate, fair-minded, loyal, capable of savagery and humour in the same hour, and acute in his judgements to the point of wisdom, (though he would deny that). While my preference would be to fill the page with quotes, all I can do is suggest you read his story yourself and revel in his outer and inner world and his experiences, some funny, some tender, many horrific. History, that amorphous entity, is given voice by one man, a man complete in his humanity and in his lapses to complete inhumanity, a man who longs for a longer span of years than he has as yet achieved, in the company of those beloved by him.

But why “wrecked”? I was most certainly engaged by the characters in The English Patient, particularly Hana and Kip. But was there a certain dispassion, a coolness to Ondaatje’s writing? I can’t answer that question. Does my reaction to Days Without End say more about myself than about Sebastian Barry or Thomas? Perhaps. Partly. Thomas’s voice – I can’t escape the vortex of that voice. He was unbearably real, he was my son, my lost daughter, I wanted him safe, I couldn’t bear for him to die an untimely death. Whenever I’m reading with full focus and have fallen deep into story, don’t I bring all of myself and my own history to the page?

The question that surfaced in the middle of the night after I’d finished Days Without End is what impelled Thomas at the age of fifty to write down this narrative. A question I had to answer to my own satisfaction.

As will you, should you read Days Without End.