A Spin-off From Shakespeare: Can Art Be Transformative? 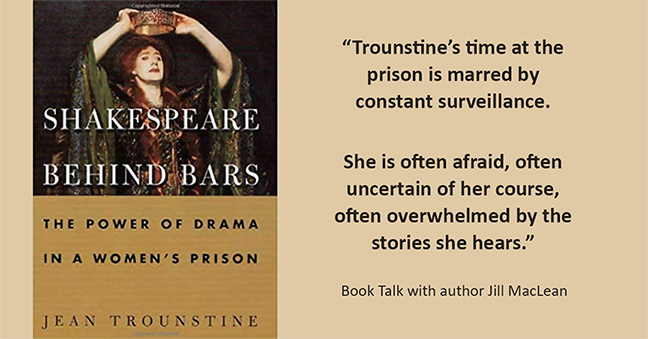 Can art be transformative?

At Central Library in Halifax the week of Shakespeare’s birthday (after I’d written the previous Book Talk post on Hamlet), there was a display near the front door of books related to the bard. I picked up Shakespeare Behind Bars: The Power of Drama in a Women’s Prison, by Jean Trounstine. Four hundred years have passed since Shakespeare wrote Hamlet. How did he affect the lives of women in a high-security US prison?

From 1986 to 1996 Trounstine taught college-level English literature and drama in Framingham Women’s Prison in Massachusetts, to inmates who volunteered for the program. She structures her book around six women whose identity she has protected and who may, at times, be composites of more than one woman. Nevertheless, it seems important that I name them: Dolly, Bertie, Kit, Rose, Rhonda and Mamie. The literary focus is on The Merchant of Venice (the book’s epigraph is the “quality of mercy” speech), for this is the play they stage to 150 inmates and a few guests, under heavy security – the first of eight plays.

I didn’t really get into the book for the first hundred pages or so, yet I persevered – not always my practice when a book doesn’t grab me fairly quickly. The six separate sections for the six women caused some repetition and skipping around in time, characters would be introduced then drop out, and initially I found the author herself elusive. I came to realize that the loose ends and my increasing confidence in the narrative quite possibly reflected Trounstine’s own experience. Her students often didn’t turn up for class – they could be in Iso or Max, transferred to pre-release or Shattuck Hospital, or could have dropped out – and she herself is finding her way in an oppressive and punitive environment whose rules, spoken and unspoken, she has to learn.

Learn she does. A fascinating aspect of this book was the gradual revelation of the author’s character and motivations. We are told from the start that she was a rebel in her youth with a fighter instinct who had earlier taught drug addicts and troubled adolescents. But by reading between the lines we begin to see her perseverance, her courage, her ability to motivate the women with free-writing and improvisations, her understanding of the self-knowledge such exercises can bring and her deep belief in the power of art to change lives. In the classroom she offers the freedom for each woman to discover something of her own individuality, the very individuality prison strives to crush.

After much hard work and many frustrations, the performance of The Merchant of Venice is a huge success. The audience “gets it” and is generous in its applause. The actors are lifted out of themselves – as one of them says, “We were stars.” A first, for many of them. An experience that will enrich them and give them confidence when they are released.

Trounstine’s time at the prison is marred by constant surveillance. She’s pat-searched on entrance. She’s reprimanded for stepping between two prisoners who were fighting, for encouraging another woman to write her observations of her neighbours in “the cottage.” Any such reprimand could exile her permanently from the prison. The unspoken rules are stark. No demonstrations to the outside world that the prison is “soft” on the inmates. No involvement of a personal nature with the inmates. Don’t get conned. Don’t hug an inmate. She is often afraid, often uncertain of her course, often overwhelmed by the stories she hears.

High-adrenaline work. She does it for ten years.

In 1994 the federal crime bill is amended and most community college and university classes are cancelled throughout the United States, despite clear proof that education reduces recidivism. The balance swings from attempts at rehabilitation solely to punishment (and lest we Canadians should feel smug, remember Harper’s “tough-on-crime” Bill C10, introduced after 33 years of dropping crime rates).

Trounstine teaches for one more year, funded now by Boston University. In the book’s epilogue she presents her 8-point political “to-do list,” an eminently sensible list, or so it seems to me. And by the time we reach the epilogue she has shown us the power of art –Shakespeare’s art, as well as that of many other writers – to change the lives of women who all too often have been born into circumstances of race, class and dire poverty that have granted them no opportunity to shine.