Here’s a Novel That Stirred Me Up. What More Can We Ask of Any Book? 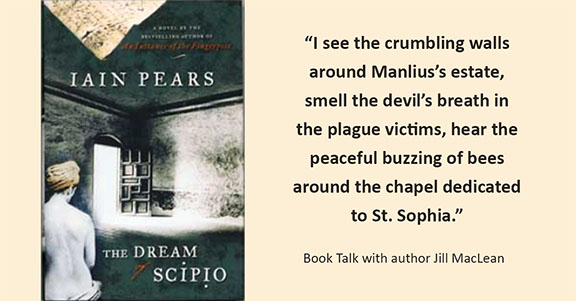 A friend gave me a copy of Iain Pears’s The Dream of Scipio several months ago because it’s set in Provence, which I’m visiting this year, and it’s partly about the plague of the mid-1300s, a century that has me hooked. I took over a week to read it.

In it, the stories of three men are told to devastating final effect. Manlius is a learned nobleman in the 5th century, striving to preserve the remnants of Roman civilisation from the barbarians. He is under the tutelage of Sophia, a philosopher of great wisdom, and sums up her thought – or so he believes – in a manuscript he calls The Dream of Scipio. Olivier is a 14th century poet in Avignon whose wily, ambitious patron, Cardinal Ceccani, wants to remove the papacy from France back to Rome; he is also a collector of manuscripts, one of which is Manlius’s, and which Olivier reads. Julien is an intellectual who joins the Vichy government in its early days in France and only slowly realizes that the decisions he’s making cause deportation and death. He too has obtained and read a copy of the Roman’s manifesto.

There are the friends of each of these men, Felix, Pisano, Marcel and Bernard. And there are the women they love: Sophia herself, unable to teach Manlius what he needs to know; Rebecca, the illiterate servant-girl sheltered by an intellectual Jewish rabbi who comes to the attention of the cardinal; and Julia, the wayward Jewish painter who, under Nazi rule, must find her own way to the truth of her art.

The novel is an erudite and morally complex interweaving of the three men’s lives, and more than one reviewer worried that even a précis (such as the above) would scare off potential readers. Neoplatonism. Virtue. The nature of civilisation. The distortions of history and religious dogma, the bonds and betrayals of love and of friendship, the attainment of immortality – and, throughout, the dangers of being a Jew in three eras of rampant anti-Semitism. These are not small matters and yes, the book is a dense read that makes demands of its reader.

In case I’m giving the impression this is too abstract a novel, too caught up in its own ideas to be compelling, Pears is highly skilled at grounding each of the three stories in concrete and believable mundane details. I see the crumbling walls around Manlius’s estate, smell the devil’s breath in the plague victims, hear the peaceful buzzing of bees around the chapel dedicated to St. Sophia.

The beginning of the book – apart from the first page – was slow, requiring a certain amount of patience, and I found myself wondering whether a story so layered and complicated almost necessitates a slow beginning – to give you, so to speak, your bearings, before you plunge deeper.

Initially, the changes of point of view from section to section (none of them lengthy) distanced me from the narrative. Furthermore, I feel Pears fails to represent Olivier’s poetry convincingly – the examples he gives are minimal and uninspiring – and there were times when I wondered if the allocations of reason and emotion to the three men wasn’t a little too tidy.

But these are quibbles. Page by page, I was drawn into the characters’ motivations and limitations, caught up in the power of a good story well-told. I won’t tell you which character drew me to him more so than the other two – although, should you read it, I’d be interested to know if you agree. Simply put, I loved the book. Masterfully constructed, filled with foreboding and suspense, it gathers itself towards an ending that reveals Manlius’s inhumanity, Olivier’s terrible silencing and Julien’s fiery end, each with its own logic, its seeming inevitability, its accretions of choice and responsibility.

How do we lead good lives? How can we, when it’s impossible to foresee the consequences of our words and actions, of deeds we carry out in the light of our limited factual and moral comprehension? This novel is an intricate and intelligent answer to questions vital to the survival of our planet’s civilisations, which are so thin-skinned, so easily ripped open to loose the barbarian within.